This isn't 'Roy of the Rovers', unless they are playing an away game in the 'Twilight Zone'. Sure it has comic book pages dedicated to match coverage of an F.A. Cup, that sees the Blades face, Liverpool, Spurs, Man Utd, Arsenal and Wolves, but it's not just about football.

It's  more 'League of Gentlemen' than 'League One Round Up,' and here's a few comments made by an independent reviewer.


Football Crazy: The Theatre Of Nightmares On The Road To Insanity, part of the CD Comics Surreal Murder Mystery Series, is certainly a different type of comic, and a world away from the mainstream. Whether you have an interest in the beautiful game or not, there’s enough there to keep anyone hooked, and the fantastically off-the-wall pay off makes for an amusingly different ending to this sort of tale, poking fun at the numerous, seemingly massed produced crime dramas that tend to flood the TV schedules. Once again Jim Rosenthal’s stellar FA Cup draws get sent up in hilarious style, along with regional news programme, Look North, which pretty much hits the nail on the head. With these quirks adding to an overall brilliant story, you really are missing out on some genius story telling if you don’t give Football Crazy a go.
Full Review
http://horrorcultfilms.co.uk/2012/07/comic-review-football-crazy-part-one/
http://horrorcultfilms.co.uk/2012/07/hcf-comic-review-football-crazy-part-two/

Or if you are lucky enough to live in or are visting Sheffield, why not buy the 66 page CDrom versions packaged in a slimline DVD case with a wrap around cover for £2.50. It's available from Sheffield's Space Centre on the Wicker, Galaxy 4 and the Record Collector in Broomhill, Blackwells on Mappin Street, Rare and Racey on Devonshire Green and from the Star building on York Street

And here's the good news for you Owls fans, it's also available locally in Blue and White 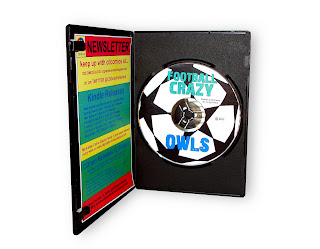