With a back catalogue of 18 digital download comic books each with a minimum of 32 pages CDComics are now being added to the UK Indie Market Place on COMICSY.

You can find CDComics on this link COMICSY

The following covers are all completed comics that are currently on sale on the download sites listed below. 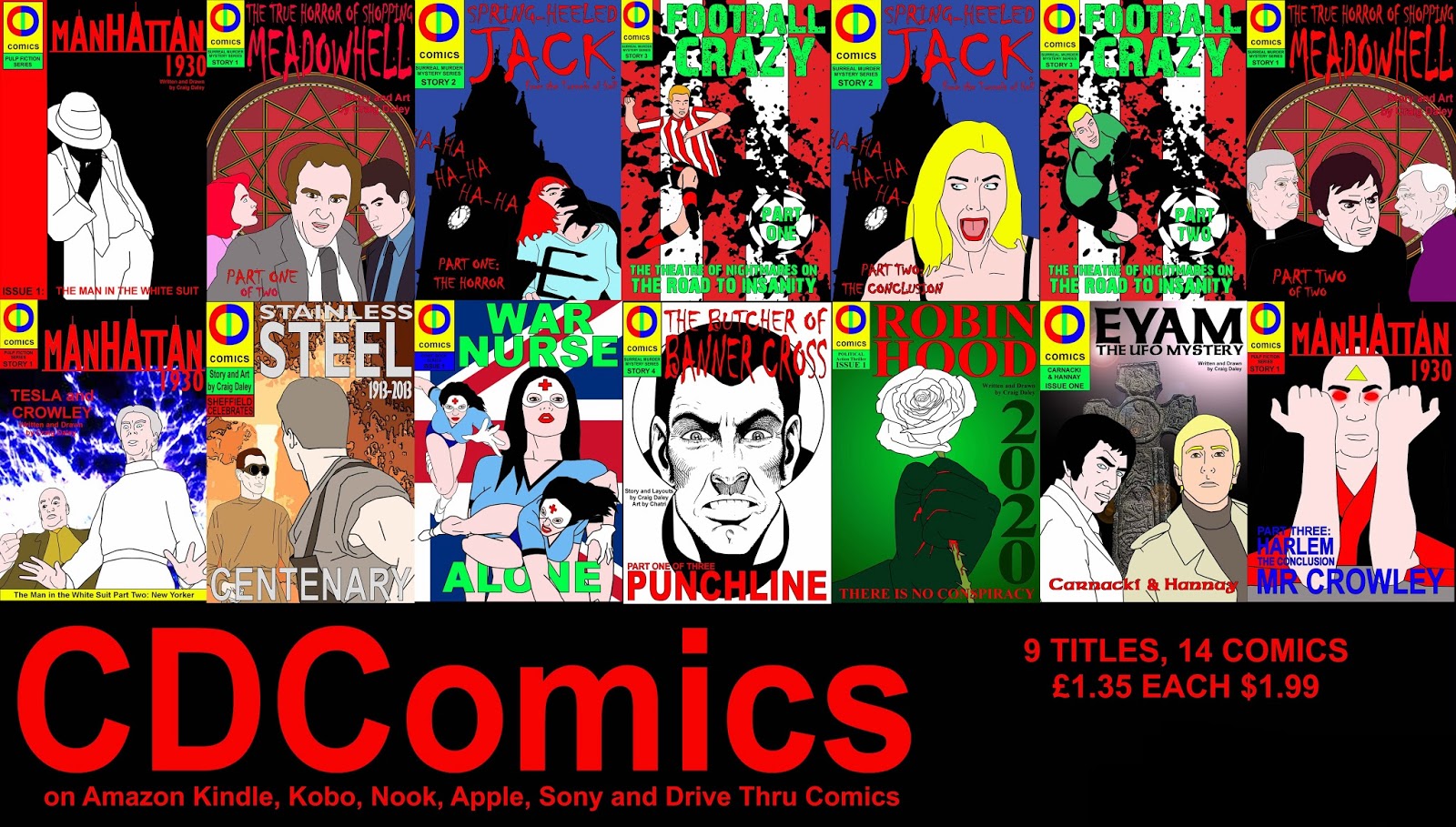 CDComics are also available locally in Graphic Novel form on CDrom, that's Sheffield UK... From Broomhill's Galaxy 4 and Record Collector, the Space Centre on the Wicker, Charisma in Crosspool, Blackwells on Mappin Street and Rare and Racey on Devonshire Green.

Independent reviewer '3 Million Years' takes a close look at 'The Butcher of Banner Cross' and here's what they had to say...

"What starts of as a simple (albeit brutal) murder becomes something else in this excellent 3-part story from CD Comics.
There’s a lot going on in this story, but although you feel immersed, you never feel overwhelmed with the information coming your way. The story is excellently written with some character moments and some really good descriptive parts. When you get to the ending of the story, you do get a feeling that you should have thought of that – all the clues are there!
The art is well done, combining the gruesome butcher scenes with some nice reactive pieces – also giving you visual clues to the final conclusion, but you won’t know it!

I really enjoyed this story and the three parts make a compelling read contrasting the police procedural and the paranormal well that would transfer well on to the screen!
Worth checking out."

You can read the full review at 3MY

CDComics titles are available from the following download sites

Horror Comics and More on Scribd.

CDComics latest Surreal Murder Mystery title is now available on Scribd. This is the forth story in the Macabre Horror Whodunit series that are all set in Sheffield UK and has an unexpected twist that takes regular readers back to the first title in series Meadowhell.

The Butcher of Banner Cross: Meat is Murder, has been getting some rave reviews
and Horror Cult Films said, 'A MUST READ FOR ALL HORROR FANS

All CDComics titles are currently available on Scribd. to download for smartphones,
tablets and android devices etc

So if horror with plenty of dark humour isn't to your taste, you could try
the Pulp Fiction style  'Manhattan 1930', the political action thriller 'Robin Hood 2020',
steampunk science in 'Stainless Steel', a UFO mystery in 'Eyam' or
maybe it's superheroes you want, well there's always 'War Nurse'

Now with Scribd. it's $8.99 a month for unlimited downloads,
but at the moment you can get a free months trial
and the good news is the struggling self publishing author still gets the royalties

Alternatively my comics are available on

The 96 page Graphic Novel in black, white and red is priced at just £2.50 and is packaged in a slimline DVD case with a wrap around cover and is compatible with all PC CDrom drives. This is part of what the Sheffield Star had to say...

He’s previously published comic books featuring murder around Meadowhall, a killer in Attercliffe and foul play at Bramall Lane and Hillsborough.
Safe to say, the Sheffield which appears in the stories of Craig Daley isn’t the most cheerful place.
Now the graphic designer, from Crookes, has released the fourth work in his quartet of South Yorkshire noir comics - and the killing keeps coming.
Full news item at http://www.thestar.co.uk/features/take-two-with-colin-drury-1-6503043

If you prefer your macabre horror on the move, the Graphic Novel is available in three 32 page parts for Smartphones, Tablets and various Android devices from the following websites, priced around £1.30 each.

"A Must Read for Horror Fans." Horror Cult Films

The Butcher of Banner Cross is available in three parts to digitally download, Punchline, Meat is Murder and Sliced and Diced. Each issue is priced around $2, £1.30 or Euro equivalent on the following eBook websites.

All CDComics titles are also available locally in Sheffield UK on CDrom from the following shops, Rare and Racey on Devonshire Green, Charisma in Crosspool, Broomhill's Galaxy 4 and the Record Collector, Blackwells on Mappin Street and Sheffield Space Centre on the Wicker 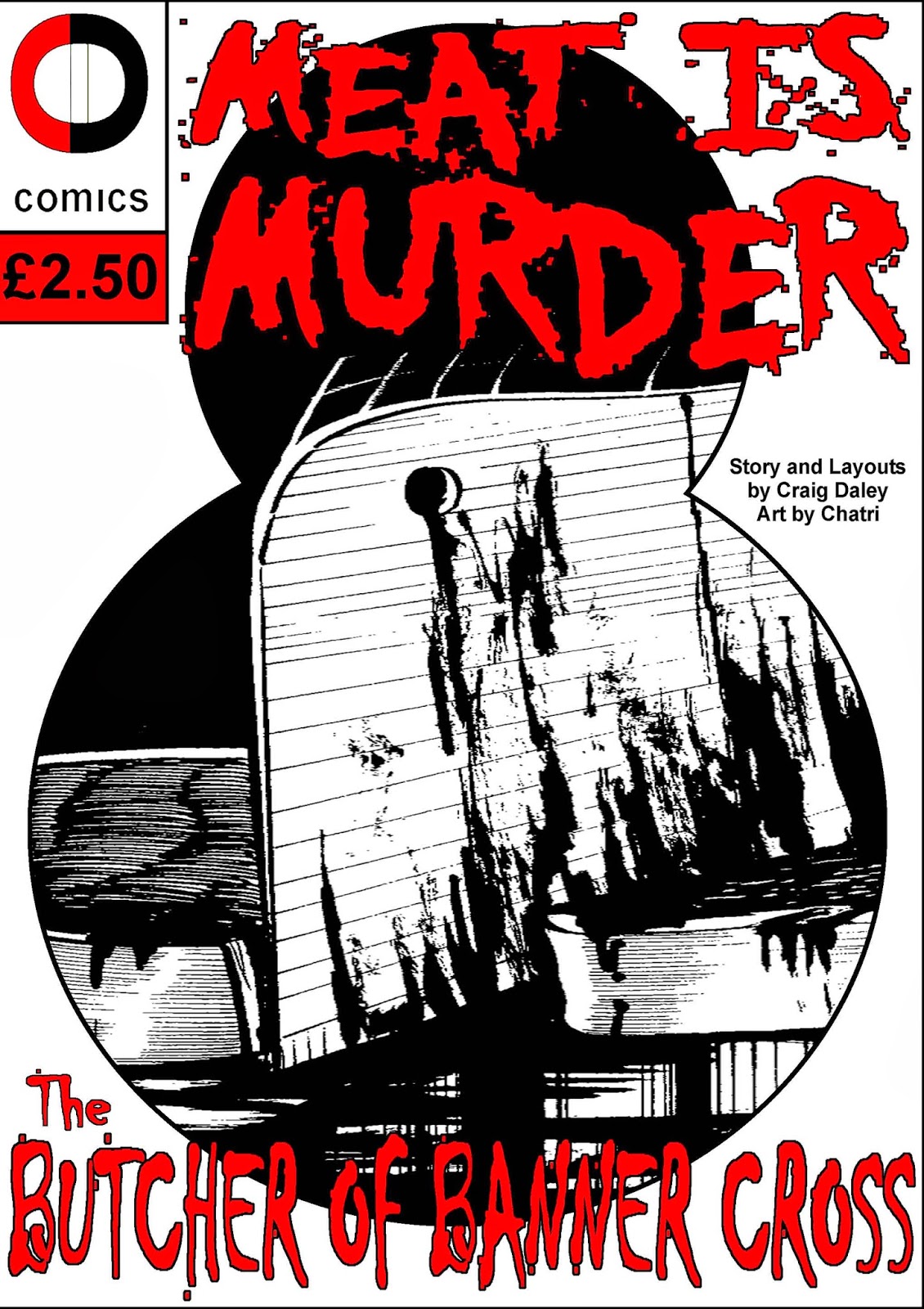 The three parts of the 'Butcher of Banner Cross' have now been brought together and released on CDrom by CDComics. This 96 page Graphic Novel in black, white and red is available from several shops in Sheffield and comes in a slimline DVD case with a wrap around cover.

It's currently available at Sheffield's Space Centre on the Wicker, Rare and Racey on Devonshire Green and Broomhill's Galaxy 4 and Record Collector.

Meat is Murder is the fourth Graphic Novel title in CDComics Surreal Murder Mystery Series, that has previously featured Meadowhell, the Attercliffe Prowler and Football Crazy (in both SUFC and SWFC colours) and that are also available at the shops listed above.

This Graphic Novel is a macabre whodunit with some dark humour and all the clues to solve this supernatural murder mystery are in the pages of the comic, but expect the unexpected this is a surreal murder mystery.

Quick Synopsis
In 2006 two gruesome murders take place in Banner Cross. The police are baffled and their investigation is complicated by the arrival of Watkins an Agent from the Office of Paradoxical and Unnatural Security (OPUS). Or rather it's complicated by Watkins involving Punchline, an investigator who specialises in the paranormal, who is as much of a mystery as the murders he is investigating.