Steampunk Invasion, Issue One: The Gathering, will be the next title released and having appeared in two earlier comics by CDComics, Nikola Tesla returns again.

This time at the 1893 Chicago Worlds Fair, Columbian Exposition where he is demonstrating his invention, but it is one of the audience that gives more away about where this narrative is heading. 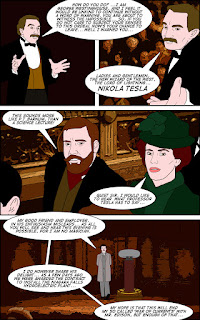 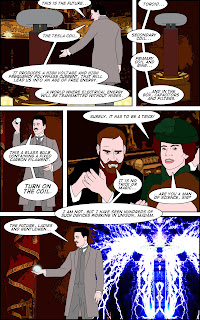 Westinghouse's dialogue is a tribute to the opening lines from Universal's Frankenstein 1931...

Nikola Tesla appears briefing in the first issue of War Nurse and the narrative of Manhattan 1930, has a subplot that follows a fight for control of New York between Tesla, the ultimate fortean scientist and Aleister Crowley the notorious English Occultist. 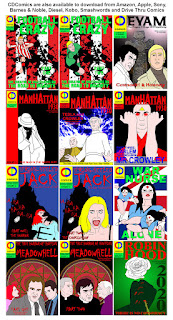 CDrom versions of the comics are also available from several Sheffield UK shops, Space Centre on the Wicker, Broomhill's Galaxy 4 and Record Collector, Blackwells on Carver Street and Rare and Racey on Devonshire Green.
Posted by Craig Daley at 22:06 No comments:

Now this is confusing, I set myself the task of working out CDComic titles position in the Sony bestsellers chart that includes free comics and those below $0.99

CDComics currently have ten comic books available on Sony, Robin Hood 2020 and Carnacki & Hanaay have still to be sorted between Smashwords and Sony. 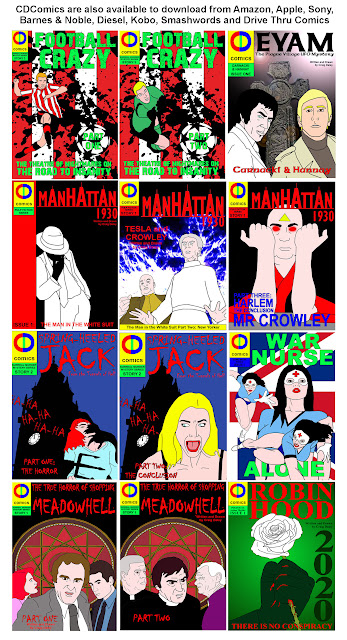 Manhattan: The Man in the White Suit, Part One: Empire State is available from Sony, but for some reason doesn't appear in the chart.

Over the weekend I've checked the chart four times and each time CDComics listed nine titles have moved all over the place in a chart that includes 200 titles.

Football Crazy: The Theatre of Nightmares on the Road to Insanity, was in 10th position, Spring Heeled Jack: From the Tunnels of Hell  reached as high as 7th, Meadowhell: The True Horror of Shopping hit 21st and War Nurse 30th, while the second and third issues of Manhattan 1930, mainly hung around in the 30's and 40's, while Manhattan 1930: Part One never appeared, but was often at the top of my personal bestsellers list.

I'm totally baffled, the Kobo, Crime and Mystery Chart is much less complicated 3 comics in the top 10 and Meadowhell just bubbling under.

Anyway most of titles are just $0.99 and all have more than 32 full colour pages and have been getting rave reviews, so why not have a read

The comics are available from the following websites worldwide, you may need to checkout a few of the sites to get the full range.

Robin Hood 2020: There is no Conspiracy, is a political action thriller set in a dystopian Britain just seven years into the future...

Other CDComics available for Amazon/Kindle

'Robin Hood 2020: There is no Conspiracy', will be released Tuesday 15th January 2013 for download to Smartphones, Tablets, Android devices or for your desktop

This a political action thriller that owes much to 'A Very British Coup' and takes the reader just seven years into a future that is all too similar to the present day. How would Robin Hood respond to Politicians cheating on their expenses, Bankers taking huge bonuses, while the gap between rich and poor continues to grow. 'Robin Hood 2020' just takes the present political climate and direction, moving it forward seven years into a recognisable dystopian nightmare.

For more information and images vist the Robin Hood 2020 page on this blog... http://cdgraphicnovels.blogspot.co.uk/p/robin-hood-2020.html
This first 32 page full colour issue will be priced $1.99/£1.25 with slight variations on different sites

The comic will also be available on CDrom with PDF and JPEG versions, packaged in a slimline DVD case with full wrap around cover from several Sheffield shops, priced £2.50

Sheffild Space Centre on the Wicker, Broomhill's Galaxy 4 and Record Collector, Rare and Racey on Devonshire Green and Blackwells on Carver Street.