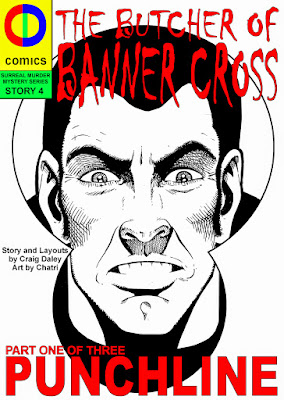 Review Extract: "The first chapter of a three part story, PUNCHLINE... manages to inject a bit of humour, in what is an actual brutal comic. The black and white style of the comic is used to great effect and keeps it from being too gory to read visually, though the written words do enough to turn your stomach as Punchline (The Surreal Detective) thinks nothing of blurting out the brutal details of the murder, seemingly unaffected by what he’s witnessed.

The Butcher of Banner Cross: Punchline is a fantastic start to a supernatural murder mystery series... a must-read for horror fans."

for the full review visit horrorcultfilms.co.uk

Previous Surreal Murder Mysteries in this series include Meadowhell, Spring Heeled Jack (released locally as the Attercliffe Prowler) and Football Crazy (available in both local team colours) and there are other titles from CDComics.

The download comics are available priced around £1.30/$1.99 from the following websites

Or if you live in Sheffield, the CDrom Graphic Novels packaged in slimline DVD cases with a wrap around cover are available priced £2.50, from Sheffield's Space Centre on the Wicker, Broomhill's Galaxy 4 and Record Collector, Blackwells Mappin Street or Rare and Racy on Devonshire Green.

But the Butcher of Banner Cross has to reach #3 in 2014 before being released locally as a CDrom Graphic Novel, so why wait... download it!