Terry of Comicbitonline post about CDComic's  Spring Heeled Jack: From the Tunnels of Hell
http://www.comicbitsonline.com/2012/11/03/cd-comics-spring-heeled-jack-from-the-tunnels-of-hell/ 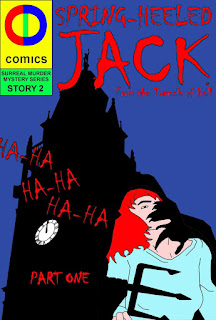 Historically, London 1837 has been established as Victorian prankster demon’s first appearance and within 20 years Spring Heeled Jack appeared in ‘Penny Dreadfuls’ and is often referred to as the inspiration behind Bram Stoker’s Dracula and Bob Kane’s Batman.
But in 1808, a letter to the Editor of the Sheffield Times referred to a prankster demon that had terrorised the town years before and the description of the ‘Park Ghost’ matched, a fire breathing, red eyed, laughing and pitchfork wielding, building leaping demon from hell.
In 1873 and 1973 Spring Heeled Jack returned to Sheffield and again sightings were reported in the local press, now based CDComics are bringing the prankster demon home and bang up to date.
The legend of Sheffield’s bogeyman has the demon using the tunnels under the city and terrorising females by ripping at their clothes and his appearances are marked by a carving of Spring Heeled Jack on the timber frame of ’s oldest pub, the Old Queens Head built in 1573.
Jack returns on Halloween 2011 and this time instead of ripping at women’s clothes, the demon is killing people, but why has the demon returned 62 years early and why is Jack killing people this time?
CDComic’s Spring Heeled Jack answers the questions and solves all the mysteries surrounding the legend of the prankster demon.
Spring Heeled Jack: From the Tunnels of Hell is also available to download in two 35 page parts from several websites priced around $0.99/80p/Euro equivalent; prices do vary slightly due to download cost charges by some suppliers.
Spring Heeled Jack Part One: ISBN: 9781476058245
Spring Heeled Jack Part Two: ISBN: 9781476116099