Football Crazy: The Theatre of Nightmares on the Road to Insanity

Football Crazy is 'Roy of the Rovers' meets 'CSI', set in the 'Twilight Zone'. It tells the story of either one of Sheffield's football teams F.A Cup run, red or blue, United or Wednesday you decide, but after their third round victory over their local rivals a bizarre macabre nightmare begins.

One of their players is murdered in strange circumstances and the Police investigation, led by D.I Charlton, must find out who the killer is and why they killed a footballer.

You can download Football Crazy in two parts and various formats priced around $1.99/£1.35UK each from

All CDComics are also available locally on CDrom in just one part priced £2.50 from Rare and Racey, Galaxy 4 and the Record Collector Broomhill, Funhouse Woodseats, the Sheffield Space Centre and Blackwells on Mappin Street. 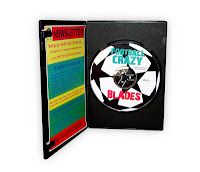